Pressure-Volume Relationships in the Respiratory System

Compliance of the Lung and the Chest Wall

The slope between 2 points on a pressure-volume curve is known as the compliance. Compliance is defined as the change in volume divided by the change in pressure (transmural pressure). Lungs with high compliance have a steep slope on their pressure-volume curves; that is, a small change in distending pressure will cause a large change in volume. It is important to remember that compliance is the inverse of elastance, elasticity, or elastic recoil. Compliance denotes the ease with which something can be stretched or distorted; elastance refers to the tendency for something to oppose stretch or distortion, as well as to its ability to return to its original configuration after the distorting force is removed.

There are several interesting things to note about the lung pressure-volume curve. From Figure 2-6 there is a difference between the pressure-volume curve for inflation and the deflation, as shown by the arrows. Such a difference is called hysteresis. One possible explanation for this hysteresis is the stretching on inspiration and the compression on expiration of the film of surfactant that lines the air-liquid interface in the alveoli. Surfactant has less effect on decreasing surface tension during inspiration than during expiration because of movement of surfactant molecules from the interior of the liquid phase to the surface during inspiration. Another explanationis that some alveoli or small airways may open on inspiration (recruitment) and close on expiration (decrecruitment); the recruitment of collapsed alveoli or small airways requires energy and may be responsible for the lower inflection point seen on  some inspiratory pressure-volume curves. Finally, it is helpful to think of each alveolus as having its own pressure-volume curve like that shown in Figure 2-6, although some researchers believe that lung volume changes primarily by recruitment and decrecruitment of alveoli rather than by volume changes of individual alveoli.

Conversely, the elastances of the lung and chest wall add directly.

Representative static compliance curves for the lungs are shown in Figure 2-7. Note that these curves correspond to the expiratory curve in Figure 2-6. Many pathologic states shift the curve to the right (i.e., for any increase in transpulmonary pressure there is less of an increase in lung volume). A proliferation of connective tissue called fibrosis may be seen in sarcoidosis or after chemical or thermal injury to the lungs. Such changes will make the lungs less compliant, or "stiffer," and increase alveolar elastic recoil. Conversely, emphysema increases the compliance of the lungs because it destroys the alveolar septal tissue that normally opposes lung expansion.

For patients wtih decreased lung compliance, they must generate greater transpulmonary pressures to breath in the same volume of air. Therefore they must do more work to inspire than those with normal pulmonary compliance.

The elastic recoil of the lungs is partly due to the elastic properties of the pulmonary parenchyma itself. Elastin is more compliant or distensible and is important at low or normal lung volumes. Collagen is less compliant or distensible and is not usually stressed until lung volume is large. However, there is another component of the elastic recoil of the lung besides the elastin, collagen, and other constituents of the lung tissue. That other component is the surface tension at the air-liquid interface in the alveoli.

Because the lung is inflated with air, an air-liquid interface is present in the lung, and surface tension forces contribute to alveolar elastic recoil. If all the gas is removed from the lung, and it is inflated again, but with saline instead of with air, the surface tension forces are absent because there is no air-liquid interface. In this circumstance, the elastic recoil is due only to the elastic recoil of the lung tissue itself. Thus, the hysteresis disappears under this condition.

Besides the surfactant's impact on elastic recoil, it has another critical importance, which would be described below. According to the Laplace's law, the transmural pressure of two alveoli with different radius would be different in the absence of surfactant (the surface tension of most liquids is constant and not dependent on the surface area of the air-liquid inteface). Consider what this would mean in the lung, where alveoli of different sizes are connected to each other by common airways and collateral ventilation pathways. If 2 alveoli of different sizes (radius) are connected by a common airway and the surface tension of the 2 alveoli is equal, then the pressure in the small alveolus must be greater than that in the larger alveolus and the smaller alveolus will empty into the larger alveolus. If surface tension is independent of surface area, the smaller the alveolus with smaller radius becomes, the higher the pressure in it. Thus, if the lung were composed of interconnected alveoli of different sizes with a constant surface tension at the air-liquid interface, it would be expected to be inherently unstable with a tendency for smaller alveoli to collapse into larger ones. Normally, this is not the case, which is fortunate because collapsed alveoli require very great distending pressures to reopen, partly because of the cohesive forces at the liquid-liquid interface of collapsed alveoli. At least two factors cause the alveoli to be more stable than this prediction based on constant surface tension. The first factor is a substance called pulmonary surfactant, which is produced by specialized alveolar cells, and the second is the structrual interdependence of the alveoli. 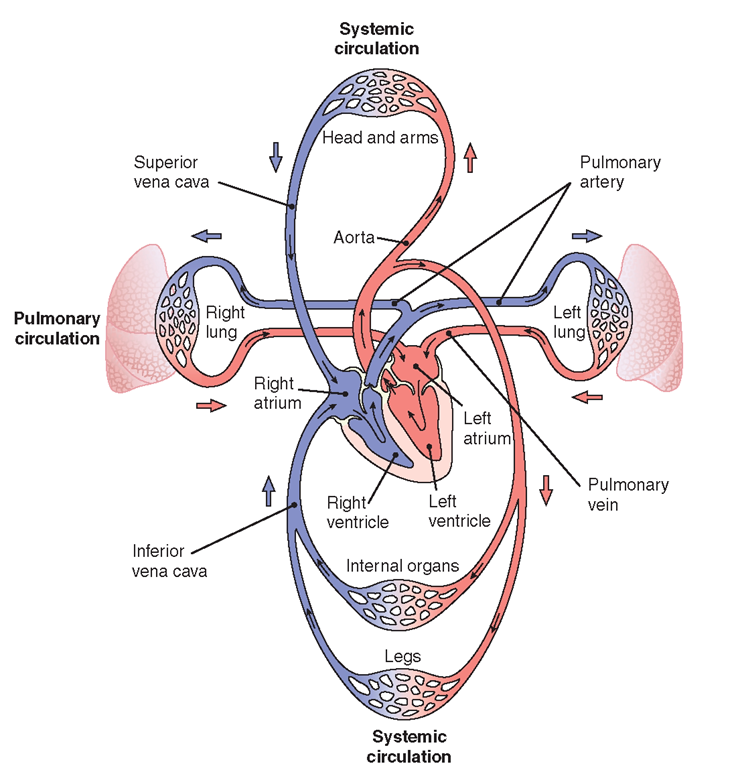 Resistances In A Single Organ

Because arterioles have a large vascular resistance in comparison to the other vascular segments (see above), the overall vascular resistance of any organ is determined to a very large extent by the resistance of its arterioles. And according to its histologic characteristics, we can change the diameter of arterioles either spontaneously or with will (i.e., arterioles inside the penis). Thus, the blood flow through an organ is primarily regulated by adjustments in the internal diameter of arterioles caused by contraction or relaxation of their muscular arteriolar walls.

When the arterioles of an organ change diameter, not only does the flow (in general flow is decreased) to the organ change but also the manner in which the pressures drop within the organ is also modified. Arteriolar constriction causes a greater pressure drop  across the arterioles, and this tends to increase the arterial pressure while it decreases the pressure in capillaries and veins. Conversely, increased organ blood flow caused by arteriolar dilation is accompanied by decreased arterial pressure and increased capillary pressure. Because of the changes in capillary hydrostatic pressure, arteriolar constriction tends to cause transcapillary fluid reabsorption, whereas arteriolar dilation tends to promote transcapillary fluid filtration (see thread Transcapillary Transport at http://www.tomhsiung.com/wordpress/2015/07/transcapillary-transport/).

Resistances In A Whole Body

According to the parallel vascular model, the TPR must always be less than that of any of the elements in the network (organ1, organ2, …, organn).

As indicated earlier, arteries and veins contribute only a small portion to the overall resistance to flow through a vascular bed. Therefore, changes in their diameters have no significant effect on the blood flow through systemic organs. The elastic behavior of arteries and veins is however every important to overall cardiovascular function because they can act as reservoirs and substantial amounts of blood can be stored in them.

Arteries or veins behave more like balloons with one pressure throughout rather than as resistive pipes with a flow-related pressure difference from end to end. Thus, we often think of an “arterial compartment” and a “venous compartment,” each with an internal pressure that is related to the volume of blood within it at any instant and how elastic its walls are.

The elastic nature of a vascular region is characterized by a parameter called compliance that describes how much its volume changes (ΔV) in response to a given change in distending pressure (ΔP): C = ΔV/ΔP. Distending pressure is the difference between the internal and external pressures on the vascular walls. The volume-pressure curves for the systemic arterial and venous compartments are shown in Figure 6-8. It is immediately apparent from the disparate slopes of the curve in this figure that the elastic properties of arteries and veins are very different. For the arterial compartment, the ΔV/ΔP measured near a normal operating pressure of 100 mm Hg indicates a compliance of approximately 2 mL/mm Hg. By contrast, the venous pool has a compliance of more than 100 mL/mm Hg near its normal operating pressure of 5 to 10 mm Hg.

This equation is simply a rearrangement of the basic flow equation (Q = ΔP/R) applied to the entire systemic circulation with the single assumption that central venous pressure is approximately zero so that ΔP = MAP. Of note is that all changes in MAP result from changes in either cardiac output or total peripheral resistance.

To be able to use pulse pressure to deduce something about how the cardiovascular system is operating, one must do more than just define it. It is important to understand what determines pulse pressure; that is, what causes it to be what it is and what can cause it to change. As a consequence of the compliance of the arterial vessels, arterial pressure increases as arterial blood volume is expanded during cardiac ejection. The magnitude of the pressure increase (ΔP) caused by an increase in arterial volume depends on how large the volume change (ΔV) is and on how compliant (CA) the arterial compartment is: ΔP = ΔV/CA. If, for the moment, the fact that some blood leaves the arterial compartment during cardiac eject is neglected, then the increase in arterial volume during each heartbeat is equal to the stroke volume (SV). Thus, pulse pressure is, to a first approximation, equal to stoke volume divided by arterial compliance:

In addition, MAP tends to increase with age because of an age-dependent increase in total peripheral resistance, which is controlled primarily by arterioles, not arteries.

The preceding equation for pulse pressure is a much-simplified description of some very complex hemodynamic processes. It correctly identifies stroke volume and arterial compliance as the major determinants of arterial pulse pressure but is based on the assumption that no blood leaves the aorta during systolic ejection. Obviously, this is not strictly correct. It is therefore not surprising that several factors other than arterial compliance and stroke volume have minor influences on pulse pressure. For example, because the arteries have viscous properties as well as elastic characteristics, faster cardiac ejection caused by increased myocardial contractility tends to increase pulse pressure somewhat even if stroke volume remains constant. Changes in peripheral resistance, however, have little or no effect on pulse pressure, because a change in total peripheral resistance causes parallel change in both systolic and diastolic pressures.