On the afternoon, July 8 2012 one male patient came to the outpatient pharmacy to take his drug. The phyisican prescribed fluoxetin accompanied by mirtazapine. I checked these two drugs in drug interaction checker and drug interactions were found between fluoxetine and mirtazapine – Potential for dangerous interaction ( may causes serotonin syndrome, although serotonin is rare but is life-threatening). I suggested the patient take these two drugs carefully. I told the man if he have the symptoms or signs of serotonin syndrome he should withdraw both drug immediately and back to hospital for further care if necessary.

The Neurology Clinics prescribled fluoxetine accompanied by mirtazapine  to a middle-age man. The dosage and frequency for fluoxetine is 20mg po Qd meanwhile that for mirtazapine is 30mg po Qd.

So due to this drug interaction, when I was dispensing these two to him, I asked him whether he was also taking or had recently taken any other psychotropic medications such as antidepressants, MAOIs, SSRIs or some drugs such as analgesics and so on, which also increase serotonin levels and may cause serotonin syndrome if they are coadministered. He told me negative. So I told him that he could take these two medications in combination, but should take with caution due to the drug interaction between fluoxetine and mirtazapine. And the most important is that I taught him how to identify serotonin syndrome. Simply that the general symptoms and signs of serotonin syndrome are clonus, agitation or diaphoresis, tremor and hyperreflexia or hypertonia, temperature above 100.4°F (38° C) and I said if he have any symptoms or signs of serotonin syndrome both drugs should be withdrawed immediately and he should go back to hospital for further care if necessary, I told him.

Finally the patient told me he knew what he should and took both drugs home.

I summarize the drugs which are implicated in serotonin syndrome. They are in  Table 1.

Table 1 Drugs that are potential to serotonin syndrome.

Other drugs if used in combination that may cause serotonin syndrome include cocaine, dextromethorphan, linezolid, l-tryptophan, and 5-hydroxytryptophan. END_OF_DOCUMENT_TOKEN_TO_BE_REPLACED

On June 6, 2005 a big bomb was stroke into the market of online video games. That’s right and the heavy weight is named “The World of Warcraft” (WOW). At the beginning I was interested in the video game but I didn’t register a account because the game is a little expensive, whom you can play 4,000 minutes online in with 30 RMB. In 2005 I was a grade two pharmacy student and many of my classmates and roommates were passionate and infatuated with WOW. I remember at that time the top level of a character or role you play was sixty.

At present my last logining to WOW was on January 20, 2012. That is I haven’t logined to WOW from more than two months. As mentioned above I didn’t join the WOW game when it firstly came into China. Now I cannot remember the accurate date when I firstly registered my WOW account. I think maybe the date I registered my WOW account was just approximately on Fall, 2005 when we grade 3 students moving from the Jiang An campus to West China campus of Sichuan University. 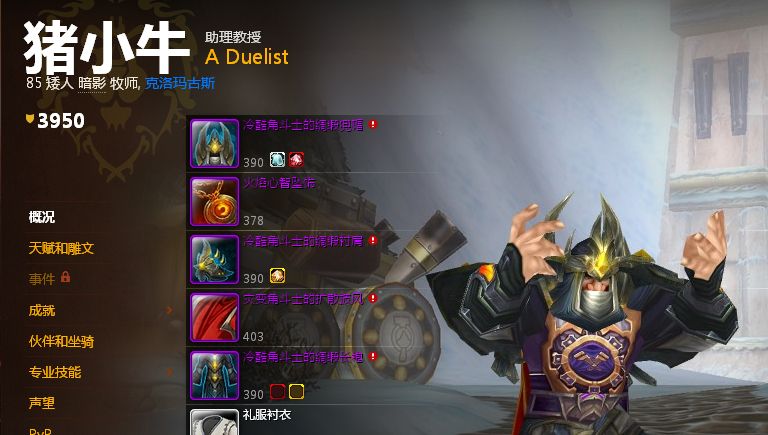 One of my characters in World of Warcraft.

So now it has been nearly seven years since I joined this online video games. I remember that in 2005, at the beginning of WOW in China. The top level was sixty and there were nine different classes who were Druid, Hunter, Mage, Paladin, Priest, Rogue, Shaman, Warlock and Warrior. There were two camps for choosing, the Alliance and the Horde. In the old sixty-level era there were only four races in both Alliance and Horde you can choose when creating a role. In the Alliance they were Dwarf, Gnome, Human, Night Elf and in the Horde they were Forsaken, Orc, Tauren, Troll. Other new races for choosing were Draenei, Worgen, Blood Elf and Goblin, who  appeared in the expansion packs of WOW well known as ”The Burning Crusade”, “Wrath of The Lich King” and “Cataclysm”. My first character is a male Human mage and I spent years of time on him. END_OF_DOCUMENT_TOKEN_TO_BE_REPLACED